Why we're clear about Revoke A50

Now is the time to REMAIN AND REGAIN CONTROL of our country to ensure that people and nations work together for a mutual benefit.  We are clear that we are the REMAIN party.  We are the political home for people who want to remain part of a reformed European Union. 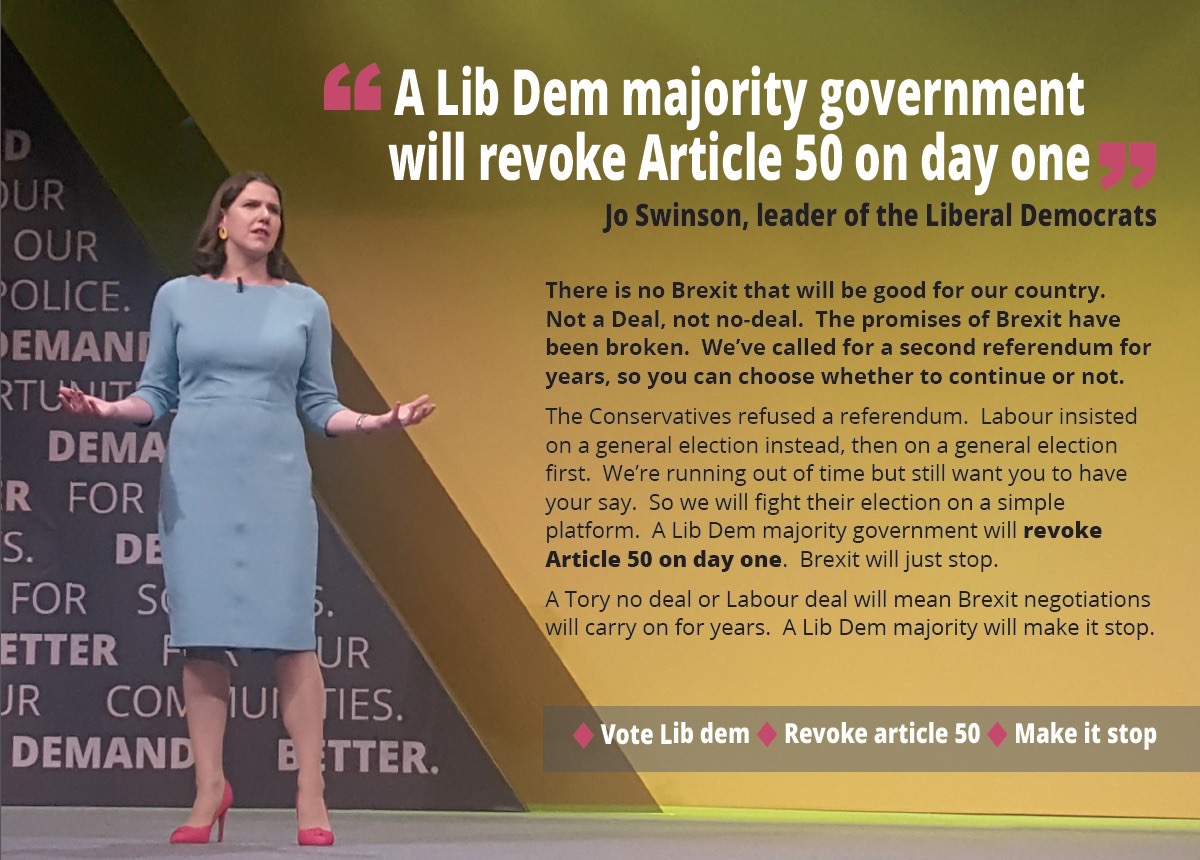 Is it democratic to overturn the referendum result without consulting the electorate?

That remains our policy.  If a Liberal Democrat Government is elected in a General Election we will revoke Article 50 without a further referendum. Our electoral system is weighted against that happening but every party has a duty to tell voters exactly what it would do in Government. At the moment, we have a “first past the post” democracy. Therefore if we won a majority it would give us a legitimate mandate to revoke Article 50. That is not undemocratic. If we do not win a majority we will continue to campaign for a People’s Vote.

But what about the 17.4 million people who voted for Brexit?  You are going up against the will of the people.

The ‘will of the people’ is the only argument remaining for the Leave Campaign. No-one can now give any hope or evidence that leaving the EU is good for our country.  The claims and promises  made during the campaign have been shown to be factually inaccurate and unachievable. Mystery still surrounds how and why their campaign was funded. The reality of Leave was never put to the voters.  Now the electorate has a better idea of the issues there is nothing wrong in repeating the question to a better informed electorate.  37% of the electorate voted to Leave the EU, 63% either voted to Remain or abstained. An estimated 1.5 million ex-pats were denied the vote altogether. This was never a strong mandate In any event. You can presume that almost 13 million voters who abstained were either  happy with the way things were  or not committed either way but not that they had a strong desire to Leave the EU.

What about the art of compromise?  Is it dead?

Clearly not and the last question shows what happens to a party that does compromise it’s principles.  A Brexit compromise has been on the table for months.  Leaving the political union but remaining in the customs union. The problem being neither side is willing to compromise. Also, there has been little consideration for the millions of people who did not vote Brexit, for the people of Northern Ireland, Scotland and Gibraltar who voted overwhelmingly to remain. The Tories set red lines and boxed themselves into a corner from the beginning of the negotiations.  Anything which risks  the end of peace in Ireland, the unity of the UK and economic meltdown leaves little room for compromise.

You say you want to make it STOP so why not vote for the deal?

We know a lot more now about the damage Brexit will cause now and we will vote for what we believe is in the nation’s best interest.  There is no 'deal' which is better than remaining in the  EU.

I’m fed up with politicians.  We vote for you, and we gave a clear mandate to leave the EU. Three and a half years on you are still arguing?  Why don’t you just get on with it?

As set out above the ‘mandate’ is far from clear and there is little evidence that a new referendum would support Leave. Although politicians on the Leave side, said it would be simple we now know it’s incredibly complex unravelling a union built up over 40+ years. The issues faced in Northern Ireland are immense and we must protect the Good Friday Agreement.  Young people who are now old enough to vote should have a voice.  It is their future.  We must protect the four nations of the United Kingdom. If the referendum has shown anything, it is the divisiveness of referendums where the population is not given enough time and enough honest information, to be able to make an informed choice.

You say we are better off in the EU but we don’t need all that.  We fought against the Nazis and won.  We are British, we will be great again.

Despite our divisions we are still a great country now. We think that the UK in Europe is stronger. The EU was formed after World War II. It was Winston Churchill’s vision for Peace in Europe.  We could not have won against the forces of evil without other countries from Europe, the Commonwealth, Russia and America. Winston understood that. We owe a huge debt of gratitude to all the soldiers, airmen and sailors from many countries who sacrificed their lives for us.  The days when  Britain felt that it ruled the world and incidentally gained huge economic benefit from its Empire are long gone.

OK, well how will you set about healing the divisions?

This will be a difficult task whatever the outcome.  However if we do not leave the EU, convinced Leavers will experience over time the benefits of remaining.  The Government will need to set about addressing and redressing their genuinely held concerns.  The Liberal Democrats have a comprehensive set of policies to help you and your families. The Government’s own reports say any form of Brexit will make us poorer, with the least well off in society being affected the most.  Brexit will not fix  a broken society and it will divert attention from the domestic agenda.

No-one trusts you anyway. Look at what happened in the Coalition Government.  You soon let all the students and parents down, reversing your policy on tuition fees. Why should we trust you now?

That is a good point, and the tuition fees should have been a red line. We tried to mitigate the increase in student fees with, what is in effect, a graduate tax.  Governments have to be pragmatic and do go back on pledges.  Our reputation was damaged by our decision on tuition fees and we were subject to a very aggressive media campaign.  You may say, “ serve you right”.  We have learned by our mistakes, have the other parties learnt from theirs?